The United Church of Canada (UCC)

UCC started its refugee journey in 1979 when it signed its first Sponsorship Agreement, stating: “When we help protect one refugee from persecution, death, or wasted years in a refugee camp, we save the world for that one person – and just maybe for ourselves too.”

Our mission is to help refugees begin a new life in Canada, and by doing so we are answering the call of Matthew 25:35 to help a stranger.

WVUC’s refugee sponsorship efforts were revitalized in 2015, sparked by the photo of young Alan Kurdi being pulled from the Mediterranean waters where he perished, along with his mother and brother. Since then, we have walked beside several families as they began their new lives in Canada. We have also supported other community and church groups to bring more than 20 people to safety.

WVUC’s resources are currently fully committed for 2021/ 2022. We are in the process of fundraising and processing applications for a number of new families. Consideration for future applications will be put on a wait list.
We will sponsor refugees from any country as long as the Canadian government recognizes them as refugees.

We sponsor refugees without regard for religion, ethnicity, gender or sexual orientation.
To date we have only sponsored families and supported family reunifications, but we are open to consider sponsorship for any person(s) with official refugee status.
We will act as co-sponsors with individuals, community groups or other churches. The refugees become part of the United Church of Canada quota, but all or part of the financial obligation may be provided by the co-sponsor (WVUC, the individual or community group).
Contact Us

What Will It Take?

Funding is required for our next 4 families:

Calculations are based on Government guidelines; however, the Lower Mainland's higher cost of living requires additional financial resources.

Why Refugee Sponsorship Is Good For Canada

We Need Your Help

Help us bring refugee families to safety and new life in Canada!

In addition to funding, we need volunteers to help prepare the government documentation prior to the arrival of the refugees in Canada, and also to support them when they arrive.

If this cause touches your heart, and you are interested in donating either your time or financially or have questions about our mandate, please contact us through the button below.

Ways You Can Help

Click here to make a gift online. You'll be taken to a separate page. Simply choose “Refugee Sponsorship Fund” in the drop-down menu when making your gift.

Volunteering on our Refugee Sponsorship Team won’t cost you a dime, but it will provide a meaningful and rewarding way for you to contribute to a cause you believe in.

Our team meets as needed, depending on the status of the application process.

Do you have a talent or skill you could share that will help these families?  The opportunities are endless and only limited by your imagination!

Refugee sponsorship has deepened my faith by revealing the importance of helping others in their time of need. It has also been uplifting to form relationships with the sponsored families, and to see their children flourish in their new homes.

When West Vancouver United Church sponsored a Syrian family, I had the chance to teach English to the young mother and father. We had a lot of fun getting to know one another and we had many laughs as we stumbled through our learning. The lesson time passed quickly. Our time together ended when the mother received a placement in a formal English language program and the father got a job. A fun time!

In 2016, I worked on the Refugee Team at Lonsdale United Church – my role was assistant to a former professional teacher of English as a Second Language. As a Professional Engineer, I had never taught English, but I had considerable experience learning other languages at least to reasonable fluency or to a rudimentary level and stages in between.

My task was to teach the very basics of English. This was quite difficult because there was very little teaching material provided, so I had to develop material on my own.

I thoroughly enjoyed this teaching experience and when West Vancouver United Church sponsored their first Syrian family several years ago, I leaped at the opportunity to get involved again and draw upon my previous experience.

My work with Ali, Birivan and their boys has been tremendously rewarding. My very first encounter with Ali was two days after their arrival. I saw him standing alone outside his apartment. When I introduced myself, he reached his arms up to the sky and shouted in the happiest voice, "I LOVE CANADA!" It so touched my heart and filled me with joy that our church was able to sponsor these wonderful, deserving people.

My name is Ali Fandi and I am working in construction 5 days a week. Also, my wife Birivan is taking Adult Education (English course). She likes to improve her English. My oldest son Hamza who is 12 years old, is in grade 6. He likes school and loves it so much that I registered him for soccer every Monday. My youngest son Mirvan is 9 years old. He is in grade 3 and he has a lot of friends.  Every day he is asking after school to play with his friend in the playground and he has a lot of fun.

In the end, I would like to say thank you to everyone who helped me come to Canada and change my life, and special thanks to people who helped me to reunite us with my mother, which was impossible for me, and thank you for making the impossible into reality.

My name is Assim. I am the father of two boys. The eldest, Hamza is 15 years old, and the youngest one Ayaz is 11 years old. I am from Syria, and we moved to Dar Shukran camp in Kurdistan because of the war conflict in Syria. We stayed in Dar Shukran camp for 8 years. Living in the camp was very difficult.

We moved to Canada on October 21, 2020. My wife, Suhaila, and I are starting to go to school to learn English, and we are in LINC 3. I am currently working full time as a painter, the same job as back home. Also, Suhaila is looking to volunteer. Hamza and Ayaz love school a lot, and they would even like to go to school on weekends if they could. They don't like to have weekends off from school.

We are so happy and fortunate to live in Canada. Especially with the crescent of support from our sponsors, West Vancouver United Church, they made a difference in our lives. 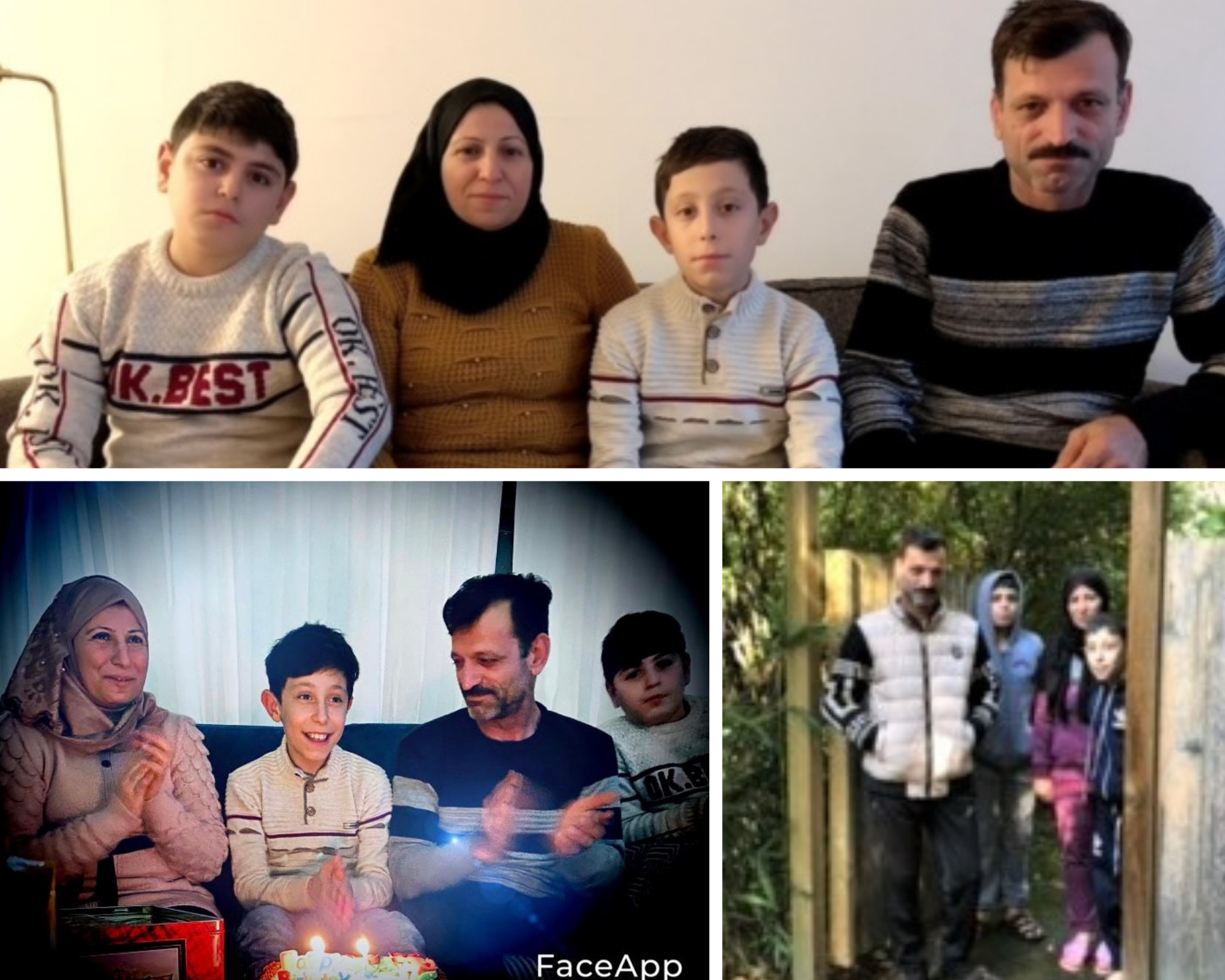 My name is Aziza Fandi. I live with my mother, Aisha and we are from Syria. We moved to Dar Shukran camp in Erbil (Iraq) in 2013, because of the war conflict in Syria and we stayed in camp for 7 years but living in camp was very difficult because it wasn't safe. We moved to Canada on October 21, 2020. I started an online class to learn the language. My mom and I are very happy living in Canada because it is a safe country and especially for our sponsors supporting us. We like to say thank you to our sponsor for making a difference in our life.

Approved For Refugee Sponsorship By WVUC Board

Due to concerns for the personal safety of family members, we will not publish photos or names at this time.

This family of five lived in Afghanistan until 2015 when the father’s support for artistic freedom and gender equality came to the attention of local Taliban officials. Threats to his family’s safety caused them to flee the country and leave behind their home, extended family, and friends.

The family, including three young children arrived in Quetta, Pakistan in April 2015 where they lived until moving to Islamabad in October 2019. The family’s application for refugee status was approved in December 2016 and their certificate has been kept current since that time. They are among the 1.4 million Afghan refugees in Pakistan, according to UNHCR’s website.

Despite having excellent skills and training as a Chemical engineer and experience in construction as a project manager, the father of this family has only been able to find limited, short-term employment in Pakistan. The family receives no financial, healthcare, or other support from Pakistan or the UNHCR. His brother here in North Vancouver tries to help but has limited resources to send.

Schooling for the children in Pakistan is very unstable and inconsistent. Their parents are doing their best to teach them at home, but it is obviously a struggle. Each month the children spend outside the school system will make it more difficult for them to graduate from school with a solid education and achieve their goals of attending university.

They are desperate to join their family here in Canada.

Waiting for An Opening on the UCC Waiting List

This family of five from the Hazara community fled Afghanistan due to threats to their family’s safety, leaving behind all that was familiar to them: their home, loved ones, the father’s job as a baker, and educational opportunities for their children. They have been living in Turkey for three years and wish to be reunited with a family member who is living in Canada. As refugees in Turkey they have limited access to facilities and their two youngest children are not able to attend school. They know the value of higher education and are very concerned that their children will not have an opportunity to complete the requirements for enrolling in university.

The Hazara massacre drove many Hazara people from their villages, including this family who feared for their safety. The situation in Afghanistan continues to be violent and concerning as evidenced by the May 2021 bombing of the girls’ school in Kabul.

The family looks forward to bringing their skills and energy to a country that will provide a safe home for them.